5 Reel Drive Slot is a video slot launched by one of the oldest software developer in the gaming industry known as Microgaming and it is composed of five reels plus nine bet lines. It is a medium volatile game with special symbols that are wilds and scatters.

Many slot players would have imagined what a slot machine that is named after the number of reels available will look like. Microgaming has bring your imaginations into reality through Quickfire by developing a slot game that is named 5 Reel Drive Slot. Just like the title of the slot, it is made up of five reels and consist of nine bet lines. The game is racing themed such that it is composed of fast driving cars. It is an average volatile game with various opportunities of increasing the payouts through the features available such as wilds, scatters, and other important icons. 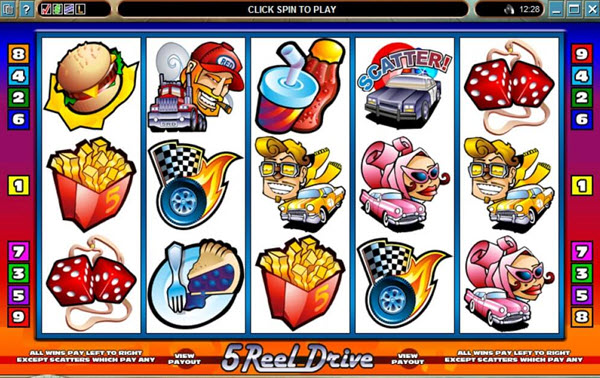 Microgaming is one of the software developer that is popular for the amazing casino games in their game collections. 5 Reel Drive Slot is among the quality slots developed by this developer whose theme is fantastic and depicts what the slot is all about. The images are presented in a two dimensional version and the background is made up of the American highway. Although in terms of the graphics and designs it is not like the newly developed games. This is understandable since it is among the oldest slot game from Microgaming. For players that do not care about too stunning graphics and designs this is the best game for them. Amazing music was added to it to make the game lively and the graphics are fantastic. When playing this game you will not experience any glitch whatsoever. It is a mobile compatibility slot which implies that the game can be played using your mobile devices. There will be no need downloading the game since it can be accessed via the browser of the device you are using.

It is advisable for players to first play this game for free so as to get accustomed with the gameplay. When you are playing with real money you will need to first stake on the bet lines and you will be able to make necessary adjustments. There is an increase and decrease button you can use to make your stake go higher or lower respectively. Also you will need to select the value of your coins and the number of coins you want wager. It is advisable to stake on all the bet lines so that you can win high amount of money. The higher the amount you stake the higher the amount you can win. After you have make necessary adjustments to your bet lines and stakes you can then spin the reels. There is a feature you can activate for the reels to spin itself known as autoplay. You will be awarded payouts when you are able to land a minimum of two icons on the active bet lines.

All the five reels are composed of twelve icons which can be divided into two categories.

The first one are representatives of things you can obtain on the road while still moving whereas the second one are those things you can obtain at the diner on the roadside after taken a quick stop. Among the icons you will come across are different kind of foods and they are the icons of low payouts. Other icons you can come across include car, fries, flaming tyre, soda, mirror dice, and so on.

Features of the Slot

5-Reel Drive Slot is a video slot developed by one of the best and oldest software developer in the game industry that is known as Microgaming. Most of the popular slots played by players are from this developer. The simplicity in the gameplay of the slot together with easy accessibility are part of the features of the slot. Apart from the base symbols there are other things that have effect on the payouts of the players and these are the wilds and scatters. Low rollers players will find the game interesting as well as high rollers. When playing this game you will not experience any glitch whatsoever and can be accessed on different platforms including mobile devices and desktops.