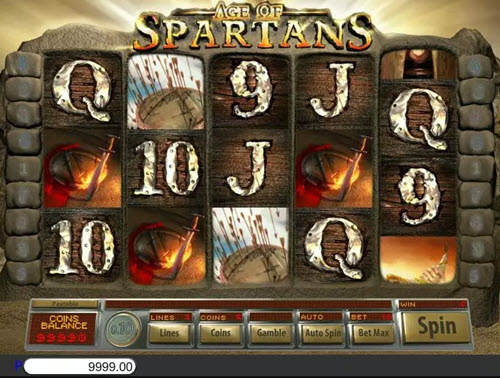 Age of Spartan is a slot powered by Saucify and has an RTP of 90.60%. Check out this in-depth guide and find out more about this slot with a History and Legends theme.

The Age of Spartans is one of many Greek mythology slots that are based on well-known people and events. Since the premiere of the popular film 300, various slots themed on the theme have been released, including Saucify’s Age of Spartans slot. The five-reel slot features decent animations and a simplistic design that tries to capture the Spartan era as accurately as possible. Even though it is a simple game with nine paylines, Age of Spartans has a lot of additional features. As you spin the reels, you can win free spins, wilds, and a gamble feature that pays 2 times or 4 times your investment. Unfortunately, the slot features a flat and plain look, as well as an incredibly low RTP of 90.60 percent, which may deter some players. If you can get past that, you can play Age of Spartans for free at Casino-on-line.com right now.

BONUS FEATURES IN THE SLOT

DETAILS OF THE SLOT

The Age of Spartans slot machine has only nine paylines, five reels, and four rows. This is significantly fewer than the industry standard of 25 paylines, implying that the chances of landing winning combos are slim. The reels are positioned against a rock, and the slot designs are unremarkable. Except for the scatter, which pays both ways, all wins in this slot pay from left to right. You can choose to play with one to nine paylines because the paylines are changeable. Before you begin spinning the reels on this video slot, you may also choose your coin per line and coin size. The betting range is 0.01 EUR to 11.25 EUR, making it appropriate for gamers on a tight budget. As a result, anyone can play this game and spin the reels.

You may also choose to gamble the maximum amount or utilize the autoplay feature, which will automatically spin the reels up to 50 times for you.

The Age of Spartans slot machine also has a variety of symbols based on war and Greek mythology, each with its own set of payouts. The King, which also acts as the wild, is the highest paying symbol. If you get five of them on any of the nine paylines, you will get 10,000 times your line bet. If you stake the highest amount allowed, you may win up to 12,500 EUR! If you land four, three, or two symbols on the reels, you will be paid 2,000 times, 200 times, and 10 times your line wager, respectively.

If you land five, four, three, or two scatter symbols anywhere on the reels, you will be awarded 500 times, 20 times, 5 times, or 2 times your line bet.

Aside from the bonus symbols, the basic paying symbols are a horn and a Spartan woman, the latter of which pays 750 times your line wager if five appear on a payline. For hitting four, three, or two, they offer 100 times, 25 times, and 2 times your stake, respectively.

Low-paying playing card symbols from A to 9 also appear in the Age of Spartans slot, with payouts ranging from 125 times to 100 times your line bet if you land five of them.

The best Bonus feature: The Age of Spartans

The Age of Spartans additional feature is the game’s highlight. For one thing, the King wild makes it easier to land winning combos. Except for the scatter, it can substitute any symbol on the reels. In addition, any winnings you get with the wild come with a two times multiplier. Fortunately, there are Age of Spartans free spins to be found. Landing three, four, or five scatters activates the free spins bonus. Following the calculation of your payment, you will be awarded 15 free spins, which can be retriggered for a total of 30 free spins. Keep in mind that when you play with free spins, all of your wins are multiplied three times!

The bonus features in the Age of Spartans slot are above average and will entice any player to spin the reels.

The Age of Spartans RTP is not particularly reliable, despite the good bonuses and high rewards. Its RTP is 90.60 percent, which is significantly lower than the norm for online slots. The Age of Spartans also has a lot of risks. If you do not become discouraged by the RTP, you can expect some big wins when you spin the reels.