We are going on a quest to find the golden panda where treasures await. Our quest will take us to the mountains of China, mountains filled with beautiful Bamboo trees Pandas love.

We will encounter countless dangers along the way, but we must not let that stop us from getting to the secret garden where our treasure lies hidden deep within the forest. Are you ready to take on the challenge given to punters the world over to find the golden panda hiding deep within the mountains in this all-new slot by Betsoft, Bamboo Rush?

Bamboo Rush is a 5 reel, 4 row slot with a total of 1024 ways to win. The face symbols in this game are illustrated by a giant panda, a yin yang logo, a lotus flower, a temple, the bamboo rush logo, golden coins, and the classic A, K, Q, J, 9, and 10 symbols.

The wild symbol which takes the place of every other symbol in the game except for the scatter to help players land more winning combos is illustrated by a green symbol with the word wild on it. It can only appear on reels 2 to 4. 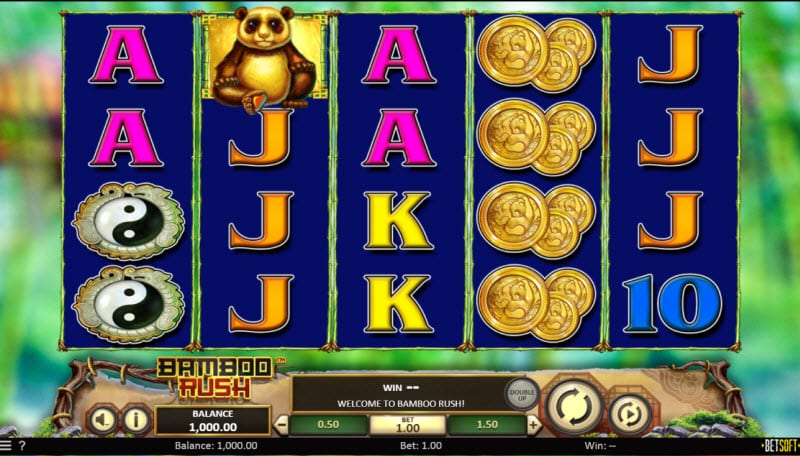 One cool feature of this Betsoft game is the double up game. How this works is that after a win during normal play, you can press the double up button for you to gamble either half or all of your winnings. You will then have to choose between heads or tails, and when you choose the winning answer, you will double your stake. The double up game is not available after free spins though.

This game though has an RTP of 95.37% so the chances of players taking home a big win are slim which is a bit of a downer. But this game does have the potential of awarding players 11,520x your total bet. So a $10 bet can turn into $115,200 right in one single spin.

Bamboo Rush is set in the mountains of China where our heroes reside. Yep, Panda bears are this game’s heroes and we are going on a quest to find the golden panda that will reward us with hidden treasures from the secret garden.

The whole game evokes a zen-like atmosphere for gaming which is perfect for players who want to spend a relaxing afternoon spinning the reels.

The theme of Bamboo Rush is not that unique as a Chinese themed slot is quite common these days. Overall, this slot doesn’t quite cut it when it comes to its graphics. Betsoft could have done a much better job with the slot’s visuals.

The RTP though is too low compared to most slot games out there in the market already. And that might hold some players back from actually trying their luck on this game. But we’ll see as this slot actually has huge potentials for its top payouts. Will you be giving this slot a try?