Buffalo Hunt Slot: Is It Worth Playing Here? 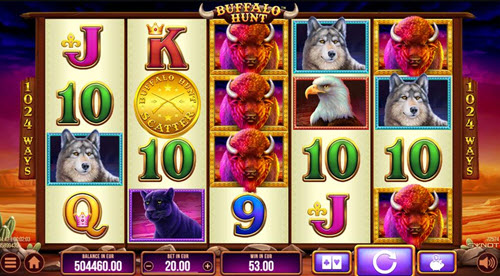 Buffalo Hunt Slot is one that allows you to join the North American wildlife without being there in person. You can hunt for win multipliers that can be as high as 27 times in the free games round.

Play the Buffalo Hunt slot online to encounter some of the majestic wildlife of North America. Eagles, wolves, and bears appear, alongside a Native American chief, and high-paying buffalo symbol. It’s a desktop and mobile game with five reels, four rows of symbols, and 1,024 different ways to line them up for a win.

Land gold coins to trigger a free game round, where wild symbols multiply wins, and you can double payouts over and over in an exciting gamble feature. Get the Buffalo Hunt slot machine in your sites at the top casinos today!

Happy Hunting in the American West

Online slots themed around wildlife often focus on the animals found roaming the plains of North America. The lifelike images used here help the Buffalo Hunt online slot to stand out, although standard high card symbols do nothing to add to the theme.

On the subject of themes, there’s a gentle Native American-type tune to accompany each spin of the reels. When an animal becomes part of a win, it springs to life and roars, bellows, or squawks at you to add another touch of realism.

Tumbleweed rolls across the desert floor in front of the reels, while the blue, purple, and orange skies behind suggest that it’s dawn or dusk in the desert. We can’t tell which, but does it really matter?

It comes from SYNOT Games, a developer from the Czech Republic with a range of desktop and mobile slots found in many of the best online casinos.

Line up the Wildlife

The Buffalo Hunt slot machine is a game with 1,024 different ways to line up symbols. To win, you need to match enough symbols on any row, across adjacent reels, starting from the left. You play with 20 coins, for between 0.20 and 40.00 per spin.

The Native American chieftain is a wild symbol that only lands on the middle three reels of the Buffalo Hunt online slot. He can substitute for any except the gold coin to complete combinations. There’s a theoretical average return to players percentage of 94.09%, which is slightly low, but acceptable.

It’s not worth much when crossing the reels, but the gold coin symbol is still valuable. Once you collect the small win from any three, four, or five gold coins, eight, 16, or 20 free spins play out. This is a scatter symbol, so you also trigger the bonus round when the coin lands in any place, even if it doesn’t create a winning combination. Just two coins don’t pay any initial prize, but the reels of the Buffalo Hunt online slot then spin five times for free.

Wild multiplier symbols appear in the free spins round, doubling or tripling the value of any combination they help to complete. If more than a single wild is in the win, the values combine for some potentially huge prizes of 27x the base rate. You get extra spins if more coin scatter symbols land at once.

Play the Buffalo Hunt slot online, and you have the option to gamble any win. A little button with two playing cards on it appears after a successful spin, and a click takes you through to the double-or-nothing gamble game. The buffalo appears on the back of a face-down card, with color buttons to either side.

If you make a correct guess of the card color, the triggering win gets doubled in value, and you can either collect the new prize or guess again. Be careful though, as any wrong pick, at any point, loses the initial prize and any gains made so far in the gamble round.

On the Hunt for Similar Game

The Blazin’ Buffalo slots game comes from Rival Gaming and has a slightly more cartoon-style than many others themed around the same animals. It’s a five-reel, 50-line game with free spins and jackpots of up to 3,000x the stake.

This is an easy game to play, although if you prefer to test slots before placing cash bets, you can play Buffalo Hunt for free right here. The realistic animal symbols, with slick animations and sound effects, take it a notch above many similar wildlife-themed games. Playing card symbols spoil the view a little, but these classic emblems appear in many similar slots.

The wild multiplier feature in the free games can be highly rewarding, especially if you land three 3x multiplier symbols and boost a prize by 27! There’s no need to hunt down the Buffalo Hunt slot machine, as we’ve found the best games featuring this and the rest of the SYNOT Games range and feature them here.

Yes, there is, and it’s available here at Casino-on-line.com. You can play the Buffalo Hunt slot for free, along with thousands of other great games on this site.

Check out our guide to the best online casino sites that carry the Buffalo Hunt slot. Join up, make a deposit, and you can then play it for real money.

You can play the Buffalo Hunt slot machine on a Windows mobile casinos device. It also works on iOS and Android smartphones and tablets, as well as on desktop platforms.

Yes, it is. The Buffalo Hunt slots game is tested by independent labs to guarantee fair play at all times. We only recommend quality tested games that you can trust.