Midas Touch slot is an online video slot game powered by Rival Gaming. This slot game is wholly designed with gold and the graphics is of 3D, there is presence of a logo icon that can award up to 2,000 coins.

Rival Game is here to offer players a game that have the ability to change what players touch into gold, this game is not a themed slot but a fruit machine that has everything that can engage players and entertain them.

Since this game is a new release by Rival Gaming, we were hoping that it will have many paylines but unfortunately, it turns out to be a slot game that lacks features. The paytable of the game does not give high payouts but it is somewhat nice and it is a medium volatility slot game with lot of entertainments.

The game has its entire design made of gold with a 3D graphics which is mostly seen upon obtaining a winning. Almost all the interface of this slot is flat such as the controls, paytable and the game. This slot has a simple design and it is user friendly on gadgets like tablet and iPhone, the sound of the game is not encouraging and it made us conclude that the game is kind of boring. There is no uniqueness in the game but it is reliable to play.

A logo icon represents the wild of the game and it is the highest paying icon. You can only win the 2,000 credits if you are able to beat with the whole 3 coins. Owing to the fact that the logo icon serves as the most unique icon of the game, it is not always easy to come by. It is difficult to obtain a winning with the logo icon but you can easily obtain a winning with a pear, landing the wild on the reels offers you a payout of a standard win. 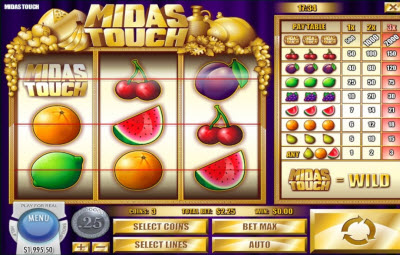 You needn’t be afraid as there are other games of this type that offer lots of exciting features unlike Midas Touch that lacks features. An example is the game titled Scary Fruits that was developed by World Match; this game is five reels, standard payouts, slot that supports all kinds of mobile phones and it has a bonus feature on offer. The game is a kind of horror game with a vivid theme design.

Comparing the two games is not ideal because there are differences in them; nevertheless, both games were designed to give what is not commonly seen in other slot games, hence, we can say there are somewhat similar. What seems to be different is the low limit bets and high payouts of Scary Fruits.

This slot game doesn’t depict the standard of Rival Gaming owing to the low payouts, absence of bonus round and quack theme. There is nothing special about this game so we advise players to play for free before playing for real cash.