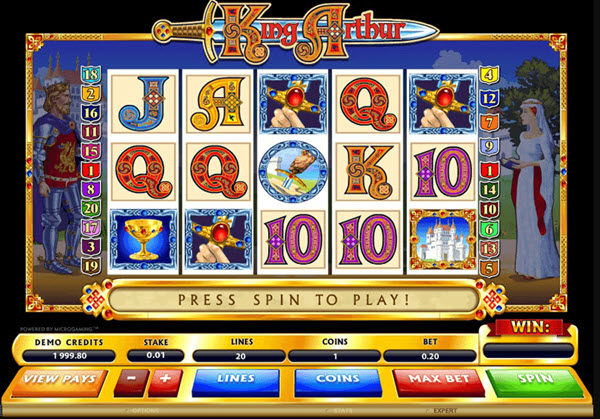 Microgaming has come with another video slot that is named King Arthur that is composed of five reels and it was launched on 22nd of July, 2015. There are twenty bet lines available for players to stake their money on. You should look out for the game payout percentage which is 95 percent indicating that you have sufficient chance to winning. When it comes to playing video slots with awesome payouts King Arthur Slot should be one of your choices. It is an average volatile game that is comprises of many features including the bonus round. It is a game that talks about the legendary King Arthur.

To spin the reels when playing for real money you will need to first place your wager and it can be from 0.01 to 0.50 which is the bet value. The minimum amount of coin you can stake on a bet line is one and the maximum amount is ten coins and there are twenty bet lines available for you to bet on. 0.20 is the minimum amount you stake for one spin and the maximum is one hundred.

If you are a slot lover that has watched a series titled Merlin, or movies about King Arthur, or you have read about the legend of King Arthur you will be able to identify the symbols present in this game easily. The theme of the game talked about King Arthur which is the same as the title of the slot. It is among the slot games that have been in the gaming collection of Microgaming for a long time.

The slot machine is made up of 5 reels, 3 rows, and twenty bet lines. The winnings are obtained from the left-hand side to the right-hand side and you can stake on all the bet lines. Winning combinations are formed when you have obtained at least three identical icons on the bet line you stake on. When you check a reel you will noticed that the total number of icons present are eleven. Some of the characters and objects you will come across in the game are Merlin, Holy Grail, King Arthur, and the sword.

There are two different wilds in the game and they are Merlin and King Arthur. However, the latter has more effect on the payouts of the players than the former such that all your winnings with it will be multiplied by two. The scatter is another special symbol in the game that is represented by the sword in the stone. The castle of Camelot represents the bonus icon used in activating the bonus round. There are other five symbols with Holy Grail and the Sword inclusive.

When you obtained a minimum of three scatters you have already gotten a chance of being rewarded with multipliers. Your winnings will be doubled when you land one scatter. After winning a payout of twenty-five times the overall bet with a multiplier of times thirty-two because you were able to obtain 5 scatter symbols therefore, making you payout to be eight hundred times the overall stake. Therefore, from this analysis it is safe to assume that the icons that have the highest influence on the winnings of the players are the scatters.

As stated earlier, the Castle of Camelot is the bonus symbol that can be used to activate the bonus round. To do this you will need to obtain a minimum of 3 of this symbol on the bet lines. During this round your objective is guiding King Arthur till he get to his castle in Camelot. You will be provided with many paths you can take such that you will decide which way you want to go two times at the beginning of the game. After that, the decided will be King Arthur and you will follow him. For taking any of the paths you can be awarded with multipliers from zero up to times four.

A lot of players have watched the series about King Arthur whereas some have not but, King Arthur Slot has provided you with an opportunity to understand the life of the legendary King. While playing the game and having fun, you are also provided with various opportunities with which you can cash out with them. Players should focus more on landing the scatter symbols since they are the symbols with the highest payout values.