Last Chance Saloon Slots Demonstration. Play this Red Tiger slot machine for free, read the review, and then rate or comment on it. 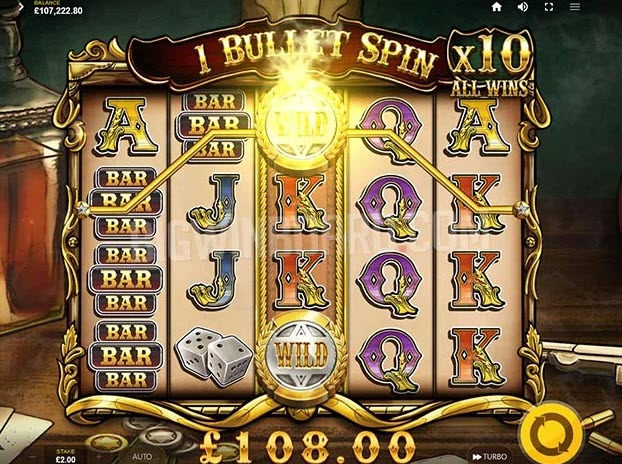 They are riding in a smokey slot machine named Last Chance Saloon. In the 19th century United States, Bars would usually use a variant of the term, ‘The Last Chance Saloon,’ to signal that patrons were approaching a region where alcoholic beverages were challenging to come by. Alternatively, it may be openly outlawed. The saloons were very literally the final places where people could get a drink for quite some time. The term Last Chance Saloon has now come to be employed in a broader variety of circumstances. Yet, it is usually intended to indicate that someone has reached a point when hope or fortune has begun to wane away.

Returning to the original definition of the word, Red Tiger gaming has created a pleasant Wild West ambience at Last Chance Saloon, which you may get to enjoy if you let it. Although the visuals aren’t awe-inspiring when contrasted to the features a few of the competitors are putting out, the game’s modest demeanor does have an attraction. Saloon doors sway in the breeze, cowboy accouterments adorn the walls, and activating free spins grants you entry to the saloon, where you will find drinks, a revolver, a hat, bullets, cash, as well as cards— all the things an outlaw could possibly need. It’s worthwhile spending a few seconds to soak up the atmosphere before jumping in — the superb stripped-down soundtrack is a big help here.

This online slot is a video slot of five reels and four rows with a total of thirty fixed paylines. When you press the spin button, part of the game’s Western glory is buried behind a standard set of game beeping sounds, which reduces the impression to some extent, albeit not totally. Choosing a bet comes first, with players able to pick anything from 10p/c to £/€20 per spin, with the option to use any device. The Last Saloon is a very volatile game that provides a theoretical return value of 95.79 percent by default. However, this amount may be lower depending on where you play.

Hitting at least three matching symbols across a payline beginning on the leftmost side results in a coin win, and the table is made up of eight paying tiles. The lowest paying symbols are J-A royals, followed by dice, cards, Bars, and Sevens, which are the highest paying symbols. The majority of the symbols are conventional slot symbols that we’ve seen a million times before, but they’re all done in a unique way, with five of them covered in what seems to be wheat. The value of premium symbols that appear in a five-of-a-kind combination ranges from 2 to 5 times the stake.

Last Chance Saloon’s features are centered on coin multipliers, bullet spins, double or nothing, and, strangely, a Second Chance feature.

The profits from a Bullet Spin are available for collection or wagering after the spin has ended. A coin with a blank side and a “double” side is flipped if the gamble is chosen as the game’s first option. It is impossible to win the whole prize pool if you land on “blank,” but it is possible to win twice as much money by landing on “double.”

If one or more coins are flipped in the original game and do not offer a multiplier, a Second Chance may be triggered, causing them to be flipped to the side that awards the multiplier. Moreover, this feature is applicable to the Double or Nothing flip that occurs after the free spins are completed. As a result, landing a blank might be seen from a different perspective.

Symbols that pay are substituted by coins, which act as wildcards. Only the center reel is occupied by them, and the back of each of them has a win multiplier. Whenever a coin is involved in a winning line, it is flipped. There is a probability that it will fall on either the multiplier or non-multiplier side of the coin, depending on the situation. x50 is a significant multiplier.

3 Bullet Symbols appearing on reels 1, 3, and 5 will activate 6 to 8 free Bullet Spins if they are landed on the same spin. It is assured that at least one Coin symbol will appear on the center reel while playing Bullet Spins slot machine. Any multipliers awarded by Coins are added to a rising global win multiplier that applies to all winning lines and is reset at the conclusion of the free spins bonus round. Reciprocal rounds are not feasible since no scatters fall throughout the round.