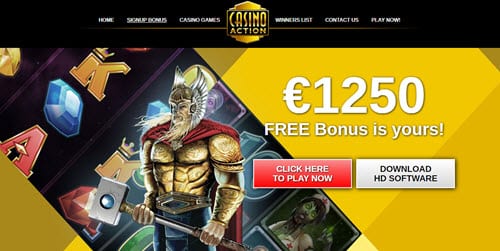 Casino Action was established in 2004, but was relaunched in 2009 and its website has been designed on several occasion giving it a new look. It became a part of the Microgaming network by entering into a partnership deal with the casino gaming giant.

This partnership has since shot it into limelight as a result of unlimited access to all of the Microgaming titles available. Casino Action is also famous for its live casino section for players who prefer to play Blackjack, Baccarat and roulette as they get to play in real time against real dealers.

Casino Action is Licensed by United Kingdom Gambling Commission and Malta Gaming Authorities and supported by Casino Rewards Group which have several other online casinos with headquarters in Malta or are licensed in Malta because European players would rather choose online casinos licensed in the EU or some other neighbouring countries.

Casino Action is focused on capturing a big chunk of the European market and shooting itself to fame hence opting for a license from Malta Gaming Authority. The implication of this is that Players from USA will no longer to be accepted to play at Casino Action until there’s a change in legislation.

Games available at Casino Action are geared towards fans looking forward to have aesthetic value, hence most of the games available at Casino Action are either classics or identical replicas of video poker games and some others. E.g. Deuces Wild, Jacks or Better and some other examples. However, there are several other original titles like SupaJax Progressive and others to discover.

Players can spin the reels of many poker games at a time by using the autoplay feature once they get familiar and comfortable with the game. But the games that gives the most fun and differentiate an amateur player from a Pro are the table games, though it is an addictive game, but it offers players the chance of playing against the dealers or against each other in major tournaments.

Majority of players prefer the modern slot machines with five reels and 243 winnings because of the potential payout offered by these games which can exceed $1million.

There are classic slot machines with three reels, they rely only on luck and does not require much of the player’s time, strategic thinking and attention. But players who require mind boggling games can try video poker games and also use basic gaming strategies to up their payouts.

Advantages and Disadvantages of Playing at Casino Action

Casino Action offers all of the popular slot games, video poker and table games developed by Microgaming and they can also be played on mobile devices without the need to download any special software.

Also the games are certified to be fair to all players by eCogra. Security and Privacy issues are of no concern as these have been taking care of by efficient encryption protocols and firewalls that tackle various security concerns efficiently.

But the disadvantages of playing at Casino Action is that withdrawals are subjected to 48 hours of delays and there’s upper and lower limit to the amount a player can withdraw at a time.

Also there’s a ban on players from USA, but those who live within the operational jurisdiction of Casino Action only get to play if they are 21 years and above instead of the official 18 years of age.

Casino Action offers 100% bonus up to £150 which is activated with a minimum deposit of £40 and a wagering requirement of 60x bonus for deposit bonus. However, the bonus is locked from the moment a player makes deposit to when he meets up fully with the wagering requirements. Bonuses can be withdrawn and a player only gets to bet with maximum of 25% bonus received on a single round of play.

Casino Action uses 128 bit SSL encryption and an efficient firewall to keep the identity of players safe by protecting the privacy of players online.

Casino Action games are audited by third parties and are proven to be fair by eCogra and their site carries the safe and fair seal.