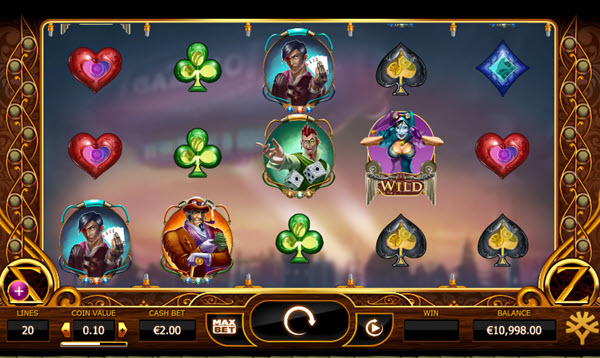 Get set to spin reels in Steampunk style in this new slot. It’s one from Yggdrasil Gaming, and the developer is pretty creative. They decorated the Reels using fancy Victorian inventors that spin around while playing, and it’s got a fantastic bonus that’ll surely grab your attention and also some sticky and transferring wilds.

Immediately you launch this game, you’ll be mind blown by its excellent soundtrack and visuals that’d function just like you’re watching a movie. You’ll see a massive Zeppelin between the Reels that are above a cloudy city, and the crazy was highlighted by roaming spotlights. It’s got transparent reels, and they offer an excellent view of the Zeppelin, and the reels symbols fit perfectly with this game. There’s a dude who’s on a waistcoat throwing dice, a female jester, a pilot, and a man with dark hair holding cards.

The major symbol that you’ll want to be on the lookout for is the man with the hat and a pipe, and you can make 5000 coins for 5 matching symbols off him and as much as 40 for 3. The man with the dice pays the second-highest, as you can earn as much as 1000 coins for 5 matching symbols off him. A woman represents the wild, and you can use her to maximize your chances of winning big. Well, they aren’t one of the major features of this game.

They perfectly illustrate all symbols, and when they spin, they spark even fly between Reels. It’s probably a little touch, but it definitely adds a more quality layer to this game. It’s also got the auto spin feature that you can turn on to automatically spin Reels if you’re busy with another thing.

Cazino Zeppelin by Yggdrasil has fixed pay lines at 20, but it’s way flexible within it has to do with your bet size as you can wager between 0.01 – 0.05. You’ll be able to adjust the speed for the quicker spin of the Reels, and that’ll surely intensify the game.

In this slot, one of the major bonus fans is its free spine spin game that can be triggered with the use of Wild symbols right on the Reels. As soon as you’ve triggered this game, you’ll be taken to the bonus game; while you’re enjoying the spins, you’ll also get some expanding wilds, so your chances of winning big will be boosted.

This game is highly impressive and has an excellent soundtrack and fantastic visuals. It also has enjoyable and smooth gameplay, and the superb bonus features are what make this game more interesting and varied. This is the perfect game for all that want an immersive game having an original theme, particularly if you’re searching for something visually different. You can play Cazino Zeppelin on a tablet, mobile, and desktop devices, alongside lots of more free games.