Dead or Alive from top software developer NetEnt was a cult classic. It’s one of the most played slots in online casino history. And, since its release on May 2009, fans have raved about the action-packed gameplay of the original Dead or Alive video slot.

Now, 10 years later, NetEnt is marking the event with a release of an all-new sequel to that ultra hit. Fans have clamored for it, so NetEnt is giving the people what they have always wanted, Dead or Alive II. Let’s dive right into the action and see what DOA II is all about!

The wild symbol, which takes the place of all the other symbols in the game to give players a boost in landing winning combos, comes in 5 different forms in this game. That’s right, this video slot has 5 different wild symbols, the Apache wild symbol, the Della Rose wild, the Jesse James wild, the Belle Star wild, and the Billy the Kid wild. These wild symbols appear on reels 1, 2, 3, 4, and 5 respectively. 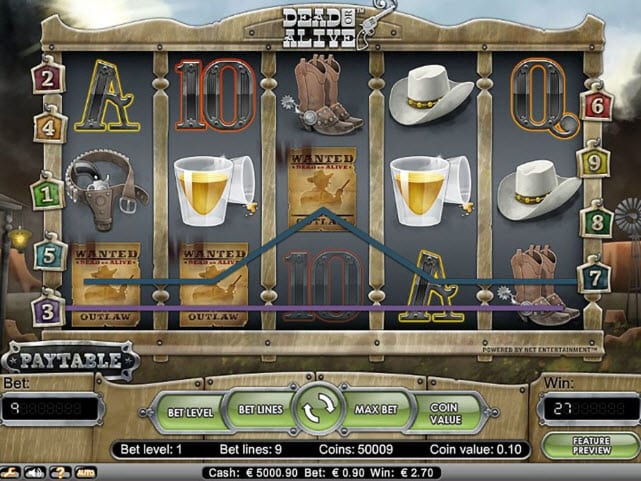 >>Play on Dead or Alive Slot

The scatter symbol, which is the symbol that will give you the highest payout in the game, is illustrated by a bull’s skull with two guns.

Action-packed is an understatement when describing this most awaited video slot. The guys over at NetEnt are considered one of the most accomplished teams in online casino software development history and they have really outdone themselves this time with a whole new Dead or Alive video slot.

This video slot consists of symbols ranging from cowboy boots, sheriff badges, whiskey bottles, and classic revolvers that just evoke the wild wild west feel. Get ready to be transported to the world of cowboys and outlaws looking to invade the next town they land on.

We must say, the guys at NetEnt has truly created a masterpiece in Dead or Alive II. And this is a sequel that has truly been 10x better than the original. The original game was a total hit but this sequel, we guess, will be a much more massive success. We recommend you try this title yourself!