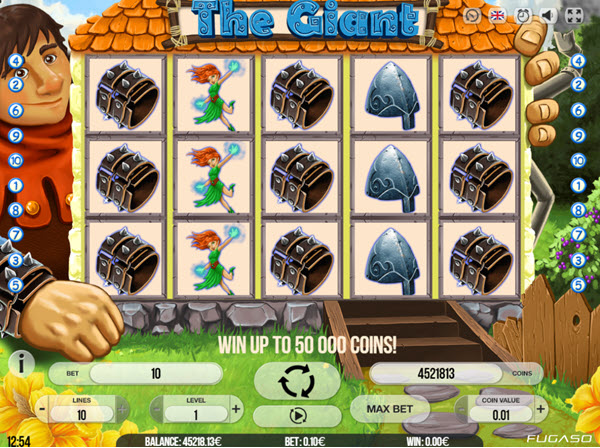 You can liken the Giant slots to be a fairy tale old storybook because of its animation type. The Giant online slot machine is one of the most entertaining games produced by Fugaso. You will like that the theme of the game rightly matches the animation type. Although, you might have one or two reservations about the apparent concept of the game. The Giant slot has its storyline centred around the ancient settings and fairy tales’ obvious concept. Although mythical stories have told us about giants, the game doesn’t mainly use any of them.

Regardless of how the game looks like graphics and theme, you can definitely enjoy the gameplay as it is of high hit rate. Additionally, you will appreciate that the game has low volatility that allows for reasonable and small swings.

The game has a layout that is almost the same as its features and play mode. You may wonder why this is? It is basically because the game offers five reels, ten paylines, and three rows—all of these features allowed for payment from right to left and left to right. Everything about the game’s idea is pretty easy because it offers you more winning ways, and you wouldn’t have to add more payment to get more spins. However, every one of your wins will come as average to compensate for the paytable’s balancing.

If you want to get the maximum RTP percentage within the giant slot, the numbers of paylines should be kept at ten. Doing this will not only increase your RTP percentage; it will also increase the rate at which you get a payout. Furthermore, in this case, betting can go as high as ten coins per line as each coin range from $0.01 to $1. For all the spins you take, this approach will deliver a total betting range from $0.10 to $100. What makes this really impressive is because it gives every player a reason to get involved.

The primary thing you will really see from the giant symbol is the prominent boot. Getting any one of the mentioned boots while on the reels means you are getting wild symbols. Hence, for every time these boots appear, you will get credited with extra winning chances.

However, these boots will only appear on the third middle reels. However, there is more to expect than that. The boots will show up and take the overall size of the vertical reel, anytime you get lucky to see them appear. Hence, this will lead to a re-spin feature being activated. Details for that will be discussed below. If by chance you get all the three symbols to appear all at the same time, you would immediately get sixty per cent of the available on the board turned to wild symbols. If this happens, the player will have a chance to win big within the game.

Getting your payout usually at every spin is always attributed to the fact that, you have been able to expand your wild symbols on the reels. Therefore, all of the wilds on the reels will be held down as a form of sticky wilds. Additionally, the remaining reels will continue to spin to make sure you get the possibility of more wins. The higher your wild symbols, the higher the number of your re-spins. The fact is, when it happens like this, there is a possibility of you getting three re-spins as attributed to the wild symbols that correspond.

If you get above on reel held in place as wild, you will immediately have your winning potential increased. When you get two reels in a row, this means, you have a guarantee of three particular types of wins in this regard. If the case is three reels in a row, your notable wins increase to four, which is guaranteed.

You will notice that the giant slots offer 10x spreads. This means you only have 10x factor between the smallest and the most significant five of a kind wins. What reveals the giant slots’ low volatility is the spread that appears at the lower end of the game. The spread is also a factor for getting the high hit rate that you get within the game. Always note that the five of a kind combo get instantly doubled every time you can land them because payment from this is just once in all of the directions.

It has never been in contemplation that the Giant Slot produced by Fugaso will win any form of awards regarding its graphics. However, the appeal of the game’s visual output is effective and serves the theme of the game right. The game is easy to understand, and the pattern is almost as generic as what has been seen from other slot machines.

Therefore, one can hardly argue that anything within the game is that special. However, if you are the one that enjoys playing low volatility games coupled with a reduced flash, you will definitely enjoy playing this game.