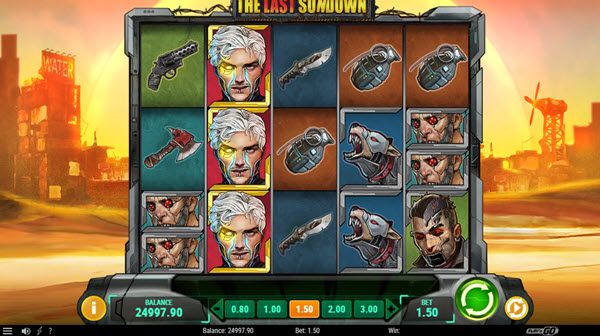 >>Play on The Last Sundown Slot

Nobody knows what the future will be like, but many people are willing to speculate. On the positive side of the prediction spectrum, you have the sort of Hegelian viewpoint where thesis generates antithesis, resulting in a higher, richer synthesis, and the world of Spirit as he sees it ascends to a higher level, in a process of self-realization. Then there is the other side of the argument, which envisions a shattered future in which a catastrophic event has reduced humanity to a Mad Max warring clan level, battling for individual survival in a resource-poor world devoid of civilization.

The Last Sundown, a Play’n GO online slot, delves into the latter scenario. Familiar ties are everything in this game, as two siblings, Rae and Devin, team up to take down baddies Tuco and Lauro to reclaim resources and fend off The Last Sundown. It sounds like any number of movies, with Water World starring Kevin Costner coming to mind. The Last Sundown, on the other hand, takes place on land rather than at sea, in a sandy landscape bathed in burning orange and populated by rickety, broken-down remnants of humanity. It is similar to K’s visit to Las Vegas in Blade Runner 2049, a city rendered uninhabitable after a dirty bomb detonated, filling it with radiation. Slot-wise, The Last Sundown initially came across as a mix of xWays Hoarder xSplit (minus the humor) and Infectious 5 xWays – both from Nolimit City.

The game’s 5-reel game grid is located in the center of this blasted wasteland. Most of the time, each reel has three positions, but symbols can split, so the number of ways to win ranges from 243 to 7,7776. When at least three matching tiles land left to right, adjacently, from the leftmost reel, a win is awarded. It is also a volatile future; Play’n GO assigns an 8 out of 10 to this aspect of the math model, while the RTP at the default setting is 96.2 percent. As always, take a moment to double-check because the return value can be reduced. Surprisingly, bets on PnG max out at Pound Sterling/Euro 50 per spin, dropping to 10 p/c at the low end of the range.

Play’n GO has ditched traditional slot symbols like suits and royals in favor of a motley crew of weapons as the five low-paying symbols. A cyborg doggy, Tuco, Lauro, Rae, and Devin make up the higher-value tiles. Premium symbols have modest values ranging from 1.2 to 5 times the stake, which are augmented by the number of ways to win. The wild symbol, which can appear anywhere and replace any of the previously mentioned pay symbols, is the segment’s final symbol. If Wilds form their wins, they are worth up to 5 times the bet for five of a kind.

With only two bonus features to cover, The Last Sundown’s future is not too complicated. One of them is Splitting Symbols, which appear in all phases of the game; the other is free spins.

The Splitting Symbol feature can be triggered on any base game spin. When activated, one of the symbols is chosen at random to be the splitter. When this symbol type appears on the reels, it is split into two, increasing the number of ways to win.

Hitting three, four, or five med-kit symbols during the base game results in eight free spins and a payout of 5x, 10x, or 50x the bet. At the start of the free spins, one pay symbol is chosen to be a splitting symbol, and one other regular pay symbol is chosen to be collected. When the chosen collection symbol lands, it adds one to the collector. The more you collect, the more additional symbols you can convert into splitting symbols for the rest of the feature. You will need six for each weapon, five for each character, and four for the wild. When you complete a collection, you will receive +3 extra free spins as well as the new splitting symbol.

When the collection feature is working properly, the gameplay and features are relatively simple yet very effective. Because The Last Sundown lacks cascades and the win multiplier that Shimmering Woods did, you are more reliant on getting a big collecting momentum going. The free spins in Shimmering Woods could also begin with up to four splitting symbols, depending on how many scatters triggered the feature, and retriggers could award additional splitters. That is not available in The Last Sundown, where collecting is the only option. As if it were the last precious well of water amid a fought-over futuristic patch of earth. On the other hand, if the collecting goes well,

The Last Sundown has a higher max win figure of 36,000 times the bet than the previous game, with a one in a billion chance of being hit.

There are some parallels to what Nolimit City is doing right now, with their expanding menagerie of splits and ways features. The Last Sundown is less complex, possibly because Play’n GO is operating to a tighter schedule than their competitor, and thus the team does not have the time to delve into the features and push envelopes with them – of course, this is all conjecture. When the Last Sundown fires up, it can certainly deliver white-knuckle gaming, and some players may welcome a more relaxed set of rules to enjoy the ride in.

>>Play on The Last Sundown Slot