Review of Mythical Creatures Slot game designed by Dragon Gaming, feature 5×3-reel grid, 30 adjustable pay-lines, puts up a play that projects into the realms of mystical life forms, the bet varies from $0.09 to $27 per spin, present RTP rate at 96.12%. 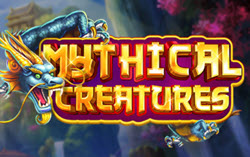 Mythical Creatures puts up a play that projects into the realms of mystical life forms, backed by so many exciting attachments. It’s one of the newest innovations of Dragon Gaming. Do you enjoy slot games structured with magical story-lines? You’ll find Mythical Creatures appealing, thumbs up to its attractive graphics and musical backgrounds, fantastic multiplier, and magnificent winning potentials.

This article covers the fundamental basis of Mythical Creatures.

Dragon Gaming developers appeared recently in the casino sector; you might not find their games yet across most casino platforms. To save you the stress, we researched some casinos you can enjoy Mythical Creatures slot machine. In the course of the search, we ensure they’re secured for play and provide unequaled game adventure.

Dragon Gaming’s competitive edge draws upon modern gaming styles, therefore expect a well-designed software enhanced for Android and Apple gadgets. The entire play attachments and fascinating graphics are well blended to suit small resolution devices to make the gaming adventure as incredible precisely as it is on desktop devices.

The imagery here with Mythical Creatures slot is an artistic production, having put across an imaginary animal story-line such that gamers become amazed by the colorful artworks, dragon characters, deer’s, tigers, and fowl. This slot scene rests upon a Chinese-designed sanctuary, with imaginary life-forms sliding about the reels. The sounds are inspiring, as it contributes to great suspense.

Mythical Creatures slot displays a Nostalgic 5×3-reel grid network, accompanied by 30 adjustable win-lines. It features seven main characters, with a sizeable hairy dragon as the best money-spinning of all. The wild characters replace any other icons excluding scatter & bonus symbols.

Any time this wild character includes among a rewarding combos, it magnifies the winnings twofold. You can also ease your play with an automatic spin attachment and turn it on either at the main interface or the game set-up. Another alternative is a swift spin mode, which you can make inactive the musicals in the background.

With 96.12% as the RTP, it’s fair enough. Mythical creature slot is very volatile; therefore, it might not suit you if you lack courage. Slot games of High variance pay not as often, though the winnings come large. The bet varies from $0.09 to $27 per spin.

In preparation to play, select the coin value $0.01- $3 for each spin, likewise the number of active win-lines. Then, tap the spin icon. Apply the swift spin control to gather momentum. Perhaps you intend to discover each winning combo; proceed to paytable by the game set-up.

The entire characters pay from left to right in successive patterns, apart from the bonus and scatter characters—five wild symbols over a win-line offer incredible winnings worth 2,000 of the player’s bet. Whenever the rabbit alchemist appears up to 5 over a win-line, it’s valued 1,000x a player bet. Whereas different characters payout from 100–500x a player bet value. During the gong bonus feature, it magnifies the winnings twofold.

This feature gets triggered whenever a player brings up three or higher of the scatter characters. As soon as it’s activated, the game offers you three gongs, with every gong assigned to a specific count of bonus spins. Altogether, players can account for at most 30 bonus spins. While the gong bonus feature is active, the total payouts become magnified twofold.

There’s another feature called “Spin the Wheel bonus.” Perhaps you appear 3 of the bonus characters with just one rolled reel; it opens you up to a gully stacked with multipliers. For players that can find their way to the game stronghold, they’ll get a whopping 200x multiplying co-efficient.

The dazzling visuals and captivating game mechanics in this Mythical Creatures can catch your interest even at the first impression you load the slot. If you’re a lover of bonus, you’ll get it in excess.