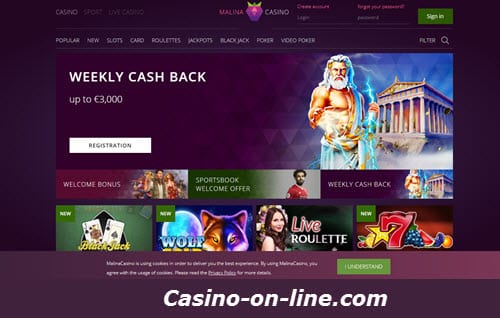 This review was revised in December 2018. The Malina casino was certified and accredited in Curacao, and Araxio Developments maintain it. They are known to supply their players and consumers with a vast variety of games from NextGen Gaming, PariPlay, Betsoft, Microgaming, ELK Studios, Rival, and Play ‘N Go. Their website has a minimalistic pattern, and the site can be identified from the presence of their logo which sports the colors; blue and white.

Malina Casino is affiliated with the Tranello Group of Companies. Although, they have come across a few issues that include sluggish customer service and assistance the protests and objections from the consumers and game players have been settled, and we now trust that their customer service will handle complaints and grievances of their players in a better way in the future.

The Malina casino usually offers a reward for signing up, and this is typically a reward of a hundred percent up to € 500, and you are given 200 free spins on a game which was not specified, but for this review, we’ll say Starburst. The minimal amount which you can deposit which will grant you access to the reward is €20

On the official website of the Malina casino, it is written that it takes about a day to handle the extraction of funds and that withdrawal cannot be processed on weekends. No statistics, information or estimate was given on the maximal and minimal amount which can be withdrawn.

The several banking alternatives which are open to players include;

For speediness, suitability and safety it is advised that you make use of Neteller.

Their collections of games include;

It took fourteen minutes to reply an email, and this was last tested in February 2018

The Malina casino has the listed licenses;

Curacao eGaming – the Malina casino is accredited by the Curacao which is among the significant permit holders in Curacao. However, it is uncertain of their effectiveness at handling player critique.

The Malina casino offers a comp point package where points are given based on the amount which is staked on slots. One comp point is given when €100 is staked. €80 is the maximal amount you can retract while playing by way of comp points

The assets which have been known to be managed by Araxio Developments N.V. have some issues with their customer service and assistance; however; they have set all their wrongs right after a short time.