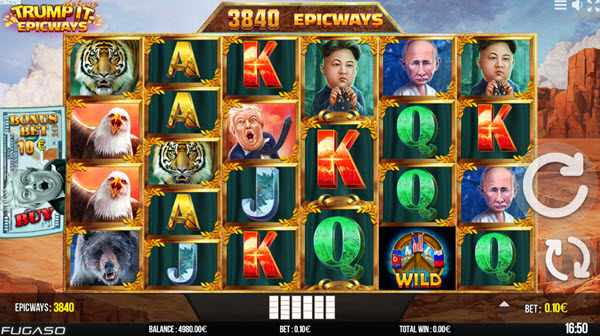 If you are interested in slot game that will give you relaxation and pleasure then you should try out this new video slot from Future Gaming Solution also known as Fugaso Gaming. The slot is named Trump It Deluxe Epicways and it is made up of six reels and fifteen thousand six hundred and twenty-five bet lines.

It is a medium variance slot with a return to player of 97.21 percent. With a minimum of 0.1 euros you can play this slot game for real money with the maximum bet being ten euros.

If you are player that prefer betting high amount of money you are going to find this game interesting. The reels are made with five rows and two to five icons will be present on each reel. This is not the first slot game that will be created like that.

This slot game was excerpted from the Trump it Series and they are both similar in their gameplay. There are many features available for players to increase their chances of landing high payouts such as free spin session, scatters, and wilds. There are two important icons that have affect the payouts of the players.

It will showcase on reels two, three, four, five, and six and when the free spin session is on you will not be able to land it. Some Other icons you can come across in the game include eagles, tigers, and bears. Another feature is the bonus round in which you will have the option of buying into the game. Therefore, you have the opportunity of activating a feature by buying it instead of waiting. Lastly, Fugaso is known for its innovative ideas and development of unique slot machines with Trump It Deluxe Epicways Slot being an example.

It is a unique slot which is made up of amazing graphics and designs plus a relatable theme. Many features are available in this game for players to increase their payouts. It is also suitable for both low rollers and high roller plus any other caliber of players.