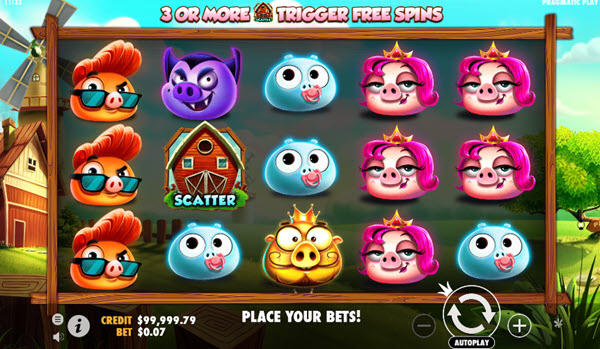 Pragmatic Play has developed another new slot machine and it is called 7 Piggies. From the title you will be able to deduced what the main characters in this game. Although pigs are regarded as a dirty animal but it has been scientifically stated that they posseses high cognitive abilities. Have you ever fancy going against a pig before? Then this game is the right avenue for you. It is a slot game that is involve the pigs landing on the seven bet lines which will lead to the players been awarded. It is an average volatile game and with a payout percentage of 95.99 percent. In the game you will come across seven different pigs with its own ability. Regardless of the fact that pigs like playing in dirts it is still adorable when being squeaky clean. The game was designed in such a way as to portray what a farmyard look like. If you have not seen a pig before here is your chance to see one.

Apart from the fact that players are enticed to play this game due to its quality, graphics , and designs, the staking requirements is another thing that made a lot of players play this game. Since it is a slot game of average volatility every caliber of players can participate in it. The least amount you can stake is 0.07 credits whereas the maximum amount is thirty-five coins. If you are a platlyer that is after enjoying yourself without spending too much of money on betting then playing this game is the best option for you.

After staking, the spinning of the wheels take place in which you will need to land the piggies on the seven bet lines from the left hand side to the right hand side. You can get as much as one thousand and five hundred times your bet if you are able to land 5 golden piggies. Landing 5 builder pigs will make you receive one hundred and fifty times your stake. If it is 5 princess pigs you will receive fifty times your stake.

There are lot of features that increases the winnings of the players and one of them is the unique bonus session. There are some symbols that affect the winnings of the players positively also and one of them is the wild. The wild is being represented by a golden pig king. It can substitute for all other symbols on the wheels to form winning combinations. However, there is another unique symbol the wild cannot replace and it is called scatter. The wilds cannot replace the scatters on the wheels and these icons are going to activate the free spin session. When activated you will be given five free spins plus one times multiplier. Players also have the opportunity of boosting the bonuses with plus three, plus five, plus eight, and plus one. The free spins can be boasted also with multipliers of plus one, plus two, plus three, and plus five. Players also have the opportunity to keep reactivating the free spin session with no limits to the number of free spins you can get.

Pragmatic Play is an online slot developer that is prominent in the gaming industry and popular for creating amazing slot machines. The game is made up with amazing graphics, designs, and soundtracks. There are lot of options for the players to increase their winnings such as the free spin session, wilds, and scatters. With 7 Piggies Slot you can get entertained and at the same time make huge amount of money playing the game.