Battle Maidens: Cleopatra slot is a game with 5 female warriors present on the reels and each of them helps you win prizes. Check it out now! 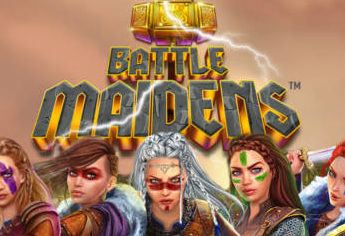 The Battle Maidens: Cleopatra slot machine features five formidable women on the reels. It’s a five-reel, mobile, and PC-optimized slot from 1X2 Gaming, with 1,024 possibilities to line up matching symbols.

Cleopatra, the ancient Egyptian queen, is joined by four other soldiers, who join forces to activate a free spins round. During this feature, the Maidens use their abilities to increase your winnings. The Battle Maidens: Cleopatra online slot offers a chance to earn 10,000 times your bet if you have these characters on your side.

We do not know who the Maidens are battling, but they appear to be a ruthless group, so we do not want to make enemies with them. This Ancient Egypt-themed slot has a charming cartoon appearance, and it’s complemented by a soundtrack that perfectly complements the style.

The reels, which are encased in gold and set within a lush environment at the height of Ancient Egyptian civilization, are flanked by statues.

Anubis, the dog-headed divinity, the Eye of Horus, the ankh, the beetle, and other famous symbols are all beautifully depicted. The game is completed with playing card symbols, yet even these have a style that complements the rest of the game.

1×2 Gaming’s Battle Maidens: Cleopatra slot machine is an outstanding addition to their portfolio. If you enjoy Egyptian-themed slots (which, based on the number of games available, most of us do), this is one to check out at the best online casino sites.

When symbols in any position on neighboring reels from the left match, the 1,024 ways to win method out. While the Battle Maidens: Cleopatra slot can be played for free, the minimum bet is 0.10 per spin, with a maximum bet of 50.00.

It has an automated spins function and can be played on both PCs and mobile devices with no changes to the features or preferences. The average return to player percentage for the Battle Maidens: Cleopatra online slot is 96.4 percent.

An angry-looking Anubis is a wild symbol that can be used to complete combos in place of the Maidens. Keep a lookout on the Eye of Horus symbol, which transforms one to four standard symbols into extra wilds each time it occurs. This will not ensure a win, but it will not hinder your prospects.

Each of the Battle Maidens: Cleopatra slot machine’s character symbols appears exclusively on its reel and works as a scatter symbol. If you get three, four, or five Maidens on the reels at the same time, you will get 10 free spins.

During the free games, the Maidens assist you by working together or individually, and some of them act as extra wilds throughout the feature. The sword-wielding Maiden transforms into a wild symbol, double any payments she assists with.

The archer is a sticky wild symbol that will stay in place for several spins. The Maiden in a Gold Headdress adds one more spin to your total with each appearance. If the warrior with the animal skull on her head appears, the win multiplier for all remaining spins is increased by one 1time.

Finally, we come face to face with Cleopatra herself. During free spins, she transforms into a wild symbol that expands to occupy all four rows of any reel she lands on.

Beetles, ankhs, and gems also feature on the five reels of Gameplay Interactive’s Cleopatra online slot. Her pet leopard triggers a set of free spins, during which a prize-picking feature might result in a massive win multiplier.

The Cleopatra Mega Jackpots online slot from IGT is perhaps the most well-known game centered on the most renowned Ancient Egyptian of all. The Mega Jackpots symbol is wild in this five-reel, 20-line game, and landing five wilds across the centerline awards a large progressive prize. Free spins with all rewards tripled and wilds that double payouts when part of a win are two further features.

An adventure in Egypt

To enjoy the good visuals and some intriguing action, play the Battle Maidens: Cleopatra slot online. Wild symbols and the possibility of extra wilds can help you win more often in the regular game, but the free games round is where it is at.

The Maidens can raise the number of spins, the payoff value, and the odds of forming a winning combination in the first place. It’s particularly effective when two or more appear at the same time and combine forces.

Check it out here, then play the Battle Maidens: Cleopatra online slot for real money at one of our recommended online and mobile casinos.

There is, indeed. The free Battle Maidens: Cleopatra slot machine is available right here at Casino-on-line.com for you to try out the gameplay, bonus features, and high winning possibilities.

The Battle Maidens: Cleopatra slot is available in a real-money form at the best online casinos that offer the 1×2 Gaming software, such as the ones we’ve recommended.

Battle Maidens: Cleopatra is available on Android and Windows mobile devices, as well as online on iPhones and iPads at the best mobile casino sites.