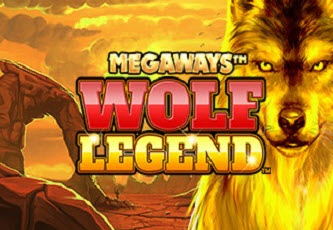 Let’s take a trip to the West, where our Wolf Legend MegaWays slot review will reveal a stunning North American wilderness scene. Not only will you be impressed by the spectacular environment and lifelike symbols, but the format and features of this Blueprint Gaming slot will as well.

Wolf Legend MegaWays is a six-reel slot machine with up to 117,649 possibilities to line up matching symbols across them. Our reviewers noted that the Wolf Legend MegaWays slots game comes with several additional features to spice up the gameplay, in addition to the amazing number of win ways.

Some of the highlights of playing this beautiful game include free games with unlimited win multipliers, cascading reels, a wild wolf symbol, and the option to gamble for bonus games.

Learn more about the game by reading our Wolf Legend MegaWays slot review, and then try it out for yourself. You can play it for free on this page, or you can try to win real money at one of our recommended online casinos.

Head West to Meet the Wildlife

This slot is a classic example of the style and attention to detail that the Blueprint Gaming brand is known for. Since 2001, the UK-based studio has been developing games as part of the German Gauselman company. The Wolf Legend MegaWays slot machine is based on a layout and mechanism created by Big Time Gaming, who invented the MegaWays technology in the first place.

Blueprint Gaming is solely responsible for the artwork. The reels are set against the majestic sandstone towers that have become a symbol of the American West. The sun is setting (or rising, who knows?) behind this landscape, adding to the visual appeal of the Wolf Legend MegaWays slots game.

Wildlife and the American West-themed slot machines are not new, but they continue to be popular with gamblers all around the world. One of the minor drawbacks of the Wolf Legends MegaWays online slot, according to our reviewers, is the adoption of normal high-card symbols as lower-value icons by the Blueprint Gaming company.

This is compensated for by the higher-paying symbols. The reels feature realistic photos of a bald eagle, bison, mountain lion, and wolf. The animal figures in the Wolf Legend MegaWays slots game all have an angry expressions on their faces for some reason. They stare at you from the screen, but that should not deter you from spinning these fast-paced reels.

The Wolf Legends MegaWays online slot game is more suited to low-stakes gamers, according to our evaluation team. The betting ranges from a low of 0.10 per spin to a high of just 10.00 per spin.

You always start with ten coins and adjust the coin value as needed. Other options include setting the reels to spin automatically for as long as you wish and using the quick play mode to speed things up.

Wolf Legend MegaWays was designed to run smoothly on Android phones, iPads, iPhones, Windows phones, and desktop computers. Because it is a high-volatility slot, rewards will be less frequent than in other games. To make up for it, the prizes are usually more valuable. The Wolf Legends online slots game has an RTP of 96.21 percent and is fully approved for fair play.

For Legendary Features, look for the Wolf.

The fundamental three symbols appear on each of the six reels, but the MegaWays system can add more symbols to a reel at any time during a spin.

We discovered that this game may produce a 7-8-8-8-8-7 symbol layout when composing our Wolf Legend MegaWays slot review. This gives you a total of 117,649 chances to land matching symbols throughout the reels, with winnings being awarded when three or more of the same type land anywhere on adjacent reels.

Any winning symbols on the reels of this online slot will vanish. New symbols come down to fill the spaces on the cascading reels, potentially creating new winning combinations for you.

Three wolves can be found in this slot. When a Gold Wolf crosses all six reels in Wolf Legends MegaWays, our testers discovered that it pays up to 50 times your stake. The wild symbol is a White Wolf, which pays the same as the other symbols but can also be used to complete sequences of matching symbols.

Respins and Free Spins can be unlocked

A Howling Wolf is a unique scatter symbol in the game. When three, four, or five of these appear on the Wolf Legends MegaWays slots game’s reels at the same time, the Golden Streak feature is triggered.

Depending on how many scatters were landed, the reels will respin one, two, or three times. Any Howling Wolf symbols that appear will be locked in place, and further respins will be added if more appear. This continues until there are no more Howling Wolf symbols on the board. The bigger the quantity of free spins, the more respins you earn.

The Wolf Legends MegaWays slot machine will then send you to the feature’s second stage. You can then choose whether to play the free spins or gamble for extra Golden Streak respins. But be careful, because if you lose the risk, you will lose the extra round.

When the free games begin, any wins in a cascading reels sequence will be multiplied by a rising multiplier. This multiplier has no maximum limit, according to our Wolf Legends MegaWays slot reviewers.

Blueprint Gaming licenses their reel format from Big Time Gaming, as we discussed in our Wolf Legend MegaWays review. Another slot machine we recommend is Bonanza, which was the first online slot to incorporate the fascinating MegaWays feature and comes from Big Time Gaming.

The subject of Bonanza is mining, and your goal is to find beautiful diamonds throughout the reels. You get 12 free spins if a scatter symbol spells out the word GOLD across the entire game. Bonanza has the same limitless win multipliers as Wolf Legend MegaWays.

The most common theme among game creators is Ancient Egypt. The presence of pyramids, scarab beetles, and Pharaohs in Blueprint Gaming’s Legacy of Ra MegaWays slot should come as no surprise. To give you a maximum of 15,625 ways to win, the game uses a slightly different mechanic than Wolf Legend MegaWays.

Set Out on an Exciting Adventure

We were thrilled by the design and playability of this great-looking game when we put together this Wolf Legend MegaWays slot review, however, we are still not sure why the animals are so irritated.

We wish you could play it for greater bets, and some players may be put off by the strong volatility. Regardless of these flaws, Wolf Legend MegaWays is a slot machine that we enthusiastically recommend. To try this game out for yourself, go to one of our top Blueprint Gaming online casinos.