The Dark Knight rises slot took its theme from the popular Batman movie, and it is produced by Microgaming. Players of this game can be happy because it is an action-packed game that comes with spins. Also, it is a video slot game of 5-reels, and it gives you 243 winning ways. The game has thrilling gameplay features like free spins and multipliers. You will also enjoy expanding the Wilds and symbol scrambler. 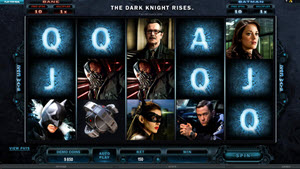 The Good Vs Evil

As we all know, the Dark Knight was one of the most successful movies of the time. Therefore, this slot game allows you to relive the moments and actions within the game. This slot game features a lot of the main movie characters. The game properly sets villains against goodies like Catwoman, Batwoman, Commissioner James Gordon, and Sergeant John Blake. Other baddies in the film like Talia al Ghul and Bane also were not left behind in this game. Quelling the surge of evil in the land becomes easy when players join to fight for justice. In this case, the question is, which side are you going with.

The Batman slot machine game does not miss out on features like the wild symbol, and it is represented with the Batman logo. Additionally, the ticking bomb represents the scatter symbol. The explosive free spins become available from the moment you are able to land 3 bombs while playing the game.

In terms of aesthetics, this slot machine is one of the best. You will enjoy the realistic photo characters that springs up when you launch the video animation in a winning combination. Additionally, the game has a specially created fight scene that includes a fight between Bane and Batman. The fight scene has lovely actions that will put you at the edge of your seat when playing.

This slot game fascinates your visual senses; it also promises the same drama as in the movie composed by Hans Zimmer. Each time you are lucky enough to get up to 5-character icons, the game plays some beautiful quotes from the film. Hearing the quotes again helps you to relish the ridiculous voices of Tom Hardy and Christian Bale all over again.

Be the slot machine player that Gotham deserves

To play and master this game, you don’t need to become a crime-fighting billionaire with unending gadgets. The reason is that the game is pretty easy to understand on your first trial. It would help if you used the (+) and (-) buttons found below the reels to toggle the game’s control. To view the advanced options, click on the “Bet” button. Using the bet button will allow you to decrease and increase the number of coins you have wagered. Additionally, you can use the same control to reduce the coin size.

Furthermore, you should always know that every one of the coins within the game is multiplied by 30. Therefore, in a case where you offer one coin, which is worth 0.01, you will get a total amount of 0.30. also, using a max bet of 5 coins will translate to 7.50.

You can now decide to click on the big “spin” button after you have mastered all of the options within the game. Immediately you use this big spin button, the reels begin to whiz, and you can sit back to enjoy the process. The autoplay button also helps you create consecutive spins. You can also use the autoplay button to decide the rolling spin number, and if you want, it can make the spin continue without ever stopping.

A battle of epic proportions

While playing the game, you will see Batman and Bane occasionally pop up on the screen to have a go at each other. They will engage in a thrilling punch fight because they are always fighting. One of the most exciting things about the punch fight is that it helps either of the characters accumulate free spins and multipliers for every punch they land. The advantage of this for spinners is that anytime you land three or more scatters, the game allows you to choose the character you want to side with. Therefore, you will get a reward associated with the number of bonus free spins of your chosen character. However, you need to know that both characters come with varying types of bonuses. Hence, it would help if you chose wisely.

You will find that the Brutal Bane comes with rolling reels which promises consecutive wins in one free spin. Also, it enable you triple the wild symbols on the super-stacked wilds to increase your chances of winning the line. Batman promises an extra Wild Blast that allows every player to pick up a wild card that substitutes for all the regular symbols within the game. However, this excludes the scatter and the standard wild symbol. The heat-seeking wilds is also part of batman’s character promises. Also, it presents with a symbol that initiates extra wild symbols on the reels randomly.

On the off chance that any of those bonuses did not work for you, you will have to wait till you find out about other features that comes with this game. The first is that the game’s expanding wild symbol displays as a red Batman logo. After its appearance, it covers all three positions on the reels to enhance your chances of getting a winning combination.

Furthermore, if you fail to win from a spin, you shouldn’t go into panic mode. Reasons for this is because the symbol scramble functionality helps to shuffle the entire symbols to get the best winning combinations possible every time your spin is unsuccessful. The thrilling part is, the game is programmed to let you win.

A Slot Machine That Makes You an Hero

This slot game comes with lots of bonus features and action-packed entertainment. Also, it comes with positively enchanting aesthetic qualities. This is also a game with a minimal risk factor, and you will also enjoy lots of profound punches in terms of entertainment. Additionally, the players are opportune to enjoy and be part of the actions as it unfolds. Do you want to pick sides with the villains or heroes? You should play it now to have a feeling of what this game is all about? Visit Spin Casino to enjoy this game of action.