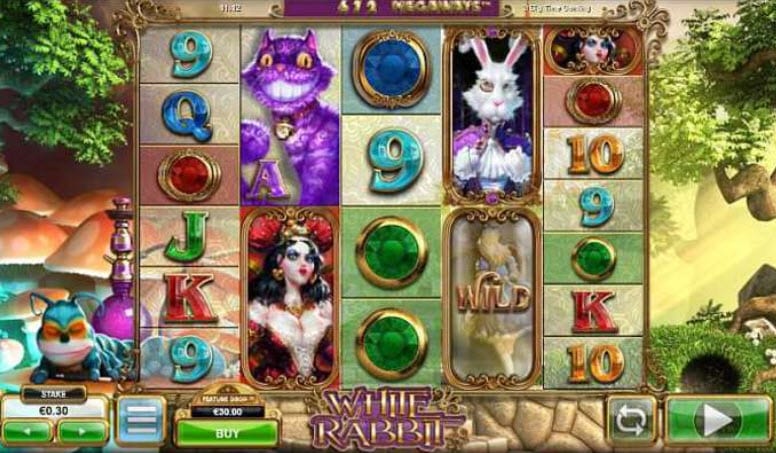 If you are a fan of the Lewis Carol story Alice in Wonderland, you will surely love White Rabbit Megaways Slot.

This video slot from Australia based game developer Big Time Gaming will transport you into the world where Alice found herself immersed in. And, we think you’ll love getting lost in Wonderland as well as you can actually rack up crazy big wins for yourself in this exciting video slot we are taking a look at.

This game features the Megaways game engine. How this works is that the game has 5 reels which can show between 2 to 7 symbols at a time giving players 16,807 ways to win.

The symbols are illustrated by different Alice in Wonderland characters. The symbol to watch out for on the reels is the the queen as when you land 5 of these on the reels, you will be awarded a payout of 25x your bet.

The wild symbol which takes the place of all the other symbol in the game to help players land more winning combos is represented by Alice herself.

The scatter symbol is illustrated by the white rabbit. Land 3 of this symbol on the reels to trigger free spins.

One cool feature of this game is when the Caterpillar creeps into the main game randomly. When he does appear, he will add up to 4 bonus wild symbols which will boost all involved combinations by 2 or 3.

When free spins are triggered, you will be given 15 free spins. The free spins will feature an extending reel. How this works is that every time the cupcake symbol appears on the reels, it will be replaced by two symbols which makes the reel extend by 1 symbol each time.

Another cool feature of this game is the Feature Drop. How this works is that players can choose to buy free spins with the price shown on the Feature drop button. Feature Drop symbols can appear on the reels from time to time though to decrease the Feature Drop price. And, when the price turns to zero, the feature will immediately trigger.

White Rabbit Megaways Slot is set in the magical world of Wonderland. As soon as you load the game, you will be taken into the sunlit forest of Wonderland where an adventure awaits you.

While spinning the reels, you will hear the delightful sound of birds chirping in the background which is extremely relaxing.

The whole gaming atmosphere this video slot evokes is a relaxing Sunday afternoon where you go and have a tea party with your friends. All, while racking up big wins for yourself.

This video slot is a delightful game which just perfectly blends the magic and fantasy of Wonderland with the excitement of racking up big wins. This is a perfect video slot which is just a breath of fresh air so do check this title out for yourself the next time you visit your fave online casino.