EVERYTHING YOU NEED TO KNOW ABOUT CRAPS

Craps game is a fast-paced game and fun-filled game that you can come across at several casinos around the world. Game of craps seems difficult when you look at the table but having an understanding of the game will make you understand that the game is simple to play. 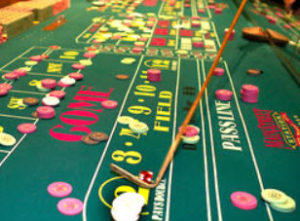 Playing craps is not as hard as some people think it is, and it is due to this mentality that some players tend to run away from involving in this game. The only thing that seems to be difficult in craps is the several forms of bets involved in the game.

There is no need for you to master all the form of bets involved, mastering one well is enough for you to play craps and their is need for you to have a better understanding of the gameplay. In this review, you will be able to know all the things that surrounds craps including gameplay, game table, basic game rules and layout of betting.

There is no ambiguity in the major objective of craps as it simply involves staking on the result that is obtainable from rolling 2 dice. Craps is solely a game of chance as the result cannot be affected in whatsoever way but players have an opportunity to place different bets. Most of the bets depends on the dice combination that a player roll.

Hence, the objective of craps is to make a right prediction of the numbers that will surface in the preceding dice roll. This makes craps a game of guess and lick and it is fun-filled.

How the Craps Table works at Live Casino

There is a table designed specially for Craps, this table has a layout for betting which allow players to place their bets. This can also be found in a live casino.

A shooter who will be among the people participating in the game is saddled with the responsibility of rolling the dice on the Craps table. This role of shooter is interchanged among the participants when each round comes to an end but there is no law that stops a player from playing the role of the shooter throughout the gameplay.

The bets can be placed by anybody playing on the table shooter inclusive, the bets is placed by placing the chips at the right point on the staking layout.

Different employees of casino are expected to monitor the craps table and these people include Stickman, Base Dealers and Boxman.

The base dealers are saddled with the responsibility of gathering lose stakes and offering winners payouts. Two base dealers are found at Crap tables and each of them stands on either side of the table. These dealers can assist players in placing bets when they are asked to do so.

The last is the boxman who is responsible for the table chips. The boxman is saddled with the responsibility of exchanging real money into chips for players and help them convert it to any denominations they request. The boxman is also in charge supervising the game dealers and overseeing the general gameplay of the game.

How the Craps Table works at Online Casino

Irrespective of where you are playing Craps, be it online or live, there is no difference in the rules though simplicity is experienced when played online. Playing online requires no shooter, the role of shooter is performed by the players playing the game at all time of play.

Pressing the relevant button helps to roll the dice automatically and bets can be placed by pressing the right point on the staking layout.

Every craps round begin with a term called come-out roll. As found in majority of casinos, it is expected of the shooter to place a bet right before making the come-out roll whether on the don’t pass line or on the pass line.

Obtaining a value that equals two, three or twelve after combining the value of the 2 dice on a come-out roll results in what is termed ‘crapping out’ and this ends the round. If this happens, a win will be obtained on the don’t oass stakes while a lose will will be obtained on the pass line stakes. Obtaining a come-out roll of seven or eleven ends the round.

Rolling other values like four, five, six, eight, nine or ten on the come-out line establishes a point which equals the rolled value and this continues the round in the preceding stage.

Players will bet on the outcome of each dice that is being rolled by the shooter until the shooter rolls seven or an established point value.

The rules given above are the basic rules of craps, the only complexity is seen in the existence of several bets.

Those are the different forms of craps bets, don’t be scared by the numerous bets types as they are quite simple to know. All you just need to do is to get familiar with each one of them.

The rules of playing Craps is quite simple though there are different types of craps bets. Just ensure you master your craft before playing, you can play craps for cash at various online casinos across the internet and you will definitely be given a sign up bonus when you make your first deposit.