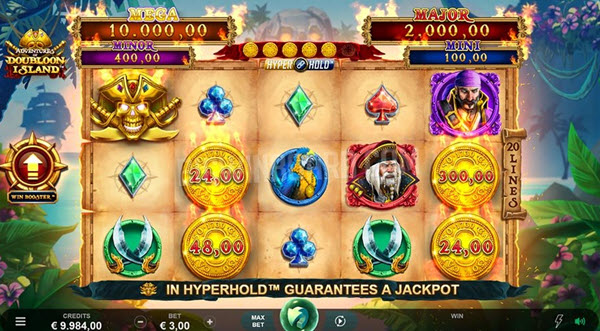 Microgaming have started the New Year on a high note with addition of new slot machines to the gaming collections. One of the newest game from this software provider is Adventures of Doubloon Island Slot that was launched in February 2021. This slot was designed by one of studios the developer had partnered with and goes by the name Triple Edge. Apart from the prizes you will be awarded for forming winning combinations, you can also benefit from the jackpots. This is a slot game that is made up of five reels, three rows, and twenty bet lines. When you apply the features present in the game you can go away with as much as three thousand, three hundred and thirty-three times your bet which will amount to two hundred and fifty thousand dollars. The payout percentage of the slot is 96.01 percent and it is an average volatile one. Some of the features you can come across in the game are wilds, free spin session, respins, and scatters.

Two different betting ranges are the options players can select from when playing the Adventures of Doubloon Island Slot for real money. You can stake a minimum of 0.10 dollars and a maximum of fifty dollars. Likewise, you can choose from as less as 0.15 dollars and as high as seventy-five dollars. When you are using the second range, your winnings will be boosted by 50 percent during the base game. You can receive about two thousand times your bet from using the main bet option. But with a booster, the payout can go as high as three thousand, three hundred and thirty-three times your bet. During the base game, the combinations formed can award you as much as one thousand times your bet per one round. The return to player of the slot is 96.01 percent and it is an average volatile game.

Two important symbols are available in thе Adventure of Doubloon Island Slot and they are the wilds and scatters. The wild can replace all other symbols on the reels and form a winning combination with it. Another feature is the respin that is activated after land a minimum of six scatter symbols. You will be given three respins which can start from the beginning if you land additional scatters during that feature. It is these scatters that will fill the jackpot meter to activate the jackpot session. During this session, you can win as much as three thousand, three hundred and thirty-three times your bet with a booster. Another feature is the free spins that is activated by a minimum of three scatter symbols to a maximum of five. You will be given a minimum of ten spins and a maximum of twenty spins for free. All the icons that are available on the reels are of high payouts.

This slot was designed by one of the top studios that Microgaming partnered with that is also known as Triple Edge. The theme of the game is about a pirate with the main character being a female. Most of the symbols that are present on the reels are what you will be exposed to when watching a pirate movie. The storyline is amazing and the graphical representation is fantastic. All the symbols on the reels are of high values with the two most important ones being the wilds and scatters.

There are many slot machines that are of the same theme as the Adventures of Doubloon Island thus, not making it special game. However, different features have been used in this game to increase the winnings of the players. If you are looking for a slot game that is full of fun experience then you should try out the Adventure of Doubloon Island.